Most everybody loves pasta – one of the world’s popular comfort foods. Widely consumed, pasta is available at supermarkets, convenience stores, gourmet outlets, bakeries, delis, and in many restaurants – fast food or full service. Made from scratch or fresh or bought in boxes or dry, pasta is a favorite around the world, and stuffed pasta is even better. It comes in different types, and sometimes it can be complicated.

Typically made from an unleavened dough of a durum wheat flour mixed with water or eggs and formed into sheets or various shapes, pasta is cooked by boiling or baking. Stuffed pasta is the same, except that delicious fillings are put inside. There are many types of filled pasta, but let’s deal with the more popular ones – ravioli, tortellini, and cannelloni.

Ravioli is arguably the most popular filled pasta. It’s a square, double layer of pasta that is stuffed with a filling in between to form a shape of a pillow. A larger version of ravioli is called ravioloni, a smaller version, ravioletti. They are typically square, though they can be circular. Usually served either in broth or with a pasta sauce, they originated as a traditional food in Italian cuisine. Ravioli can be stuffed with egg or with butternut squash. Sometimes, they use Italian sausage with fresh spinach, creamy ricotta cheese, and fresh sage, or vegetables like mushroom, arugula, or hazelnuts.

Tortellini are circles of pasta that are folded in half to form a half circle after the filling is added and then twisted to form the shape of a little hat. A larger version of tortellini is called tortelloni, the size of a walnut. The name roughly translates to small tortelli, a term formerly used in Italian to designate all stuffed pasta, which is a diminutive form of torte, savory stuffed pies. They’re delicious in broth, as well as in a tortellini salad, accompanied by spring vegetables or with asparagus, fresh peas and lemon sauce. They can have cheese inside, tomato cream sauce, spinach or Italian sausage.

Cannelloni are rolled, tubular pastas that are stuffed with a filling. Popular stuffings include spinach and ricotta or minced beef, others have chicken, goat cheese, spinach. Sometimes they are called by what’s inside the cannelloni, as Swiss chard and goat cheese cannelloni or kale and mushroom cannelloni. Often referred as manicotti in the US, but not to be confused with crepes called manicotti also. The manicotti pasta are wide and ridged pasta tubes, while cannelloni are large and smooth pasta tubes.

Stuffed pasta is generally fresh but there are frozen and dried types. The cooking times for fresh stuffed pasta are around less than 10 minutes, 2 to 4 minutes more if the pasta is frozen or dried, and also depending on the thickness and size of the pasta sheet. When cooking fresh pasta, it should be watched carefully and checked once the pasta floats to the top.

Come by Amaro Bistro this Week!

Have you decided what kind of pasta you like? If you’re still having a hard time deciding, take a look at our menu!

Without doubt, pasta is one of the world’s most popular foods. Since the era of the Holy Roman Empire, pasta, made from the flour of hard wheat with water and salt added and cooked by boiling, has earned the reputation as an Italian dish. It is not difficult to believe that with the abundance of several varieties of durum wheat that thrive in the dry climates of Italy, pasta came out of ancient Sicily. But was it truly invented there?

China was where popular history points as the birthplace of spaghetti, and that it was the famous explorer, Marco Polo, who brought the knowledge of the dish back to Venice, Italy. The spaghetti Polo might have encountered must have been the long noodles made from either rice flour or hard wheat flour that exist at the time. Now, during the Middle Ages, the variety of durum wheat known in Sicily then was introduced by the Arabs. How come?

Early in 1154, about a century before the birth of Marco Polo and before the death of Sicily’s King Roger II, a court chronicler and geographer named Edrisi completed a detailed geographical survey of Sicily. He was born in northwestern Africa, educated in Spain, and knew the Muslim Mediterranean well. Edrisi arrived at Palermo in 1139 and began his work of global geography. It resulted in The Book of Roger, It was one of the most important scientific works of the Middle Ages, praised by Sicily’s Muslims, Jews and Orthodox Christians, except the Roman Catholic Church. It had a scientific approach, different from Marco Polo’s objective treatment of his travels.

The book mentions other places explored by the author like England, Scandinavia, and Russia as well. It mentioned the Sicilian town of Trabia where the people made a form of pasta from hard wheat, shaped into long strands, and manufactured in large quantity for export to other regions. The author must have considered this important because the ‘spaghetti’ enjoyed a thriving market even outside Sicily. Trabia’s pasta (better known as vermicelli from the Italian word for the “thin worms” represents the earliest industrial production of pasta. It’s an industry that has changed the world’s tastes.

It was only a few years ago, when the promoters of Sicily’s tourism rediscovered this little known work did they use it to promote the origin of spaghetti. Now what do the Chinese have to say about that?

Or…If It’s This Delicious, Who Cares?

Try our famous Spaghetti Polpette at Amaro Bistro, a truly Italian-American dish. Ours is spaghetti with homemade pork and veal meatballs in delicious marinara and parmigiano-reggiano cheese.

Join us for Seattle Restaurant Week during April 2nd – 19th!
(Sunday-Thursday Only) Join us for a special Valentine’s Day menu at Amaro Bistro! 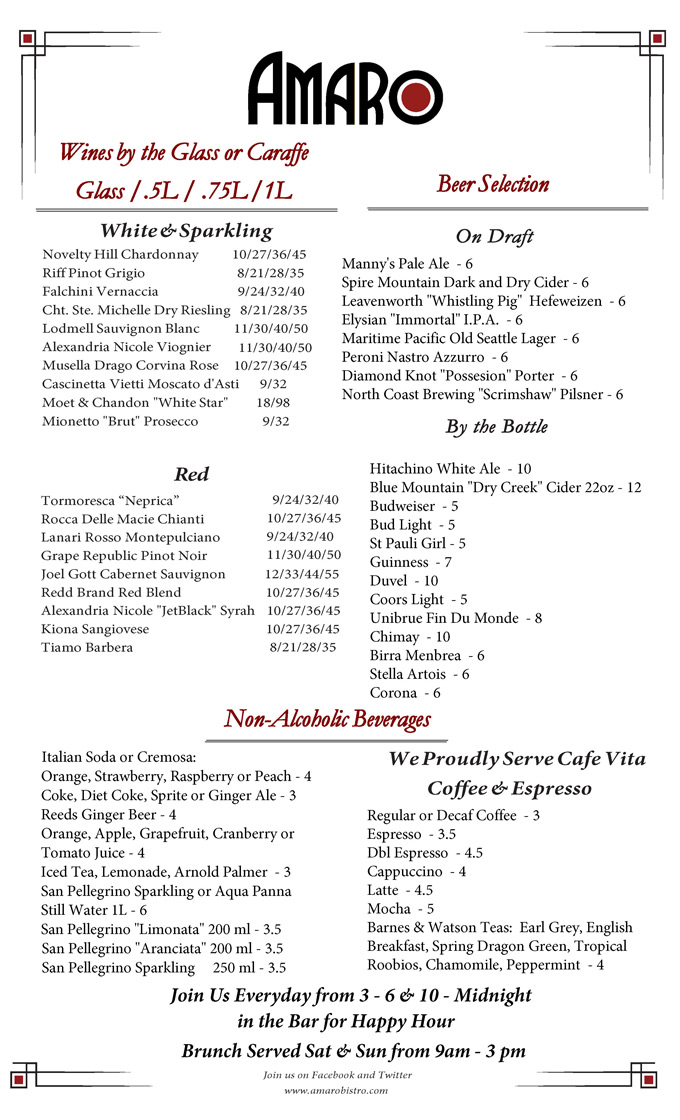 This menu will be the only menu available on New Year’s Eve. 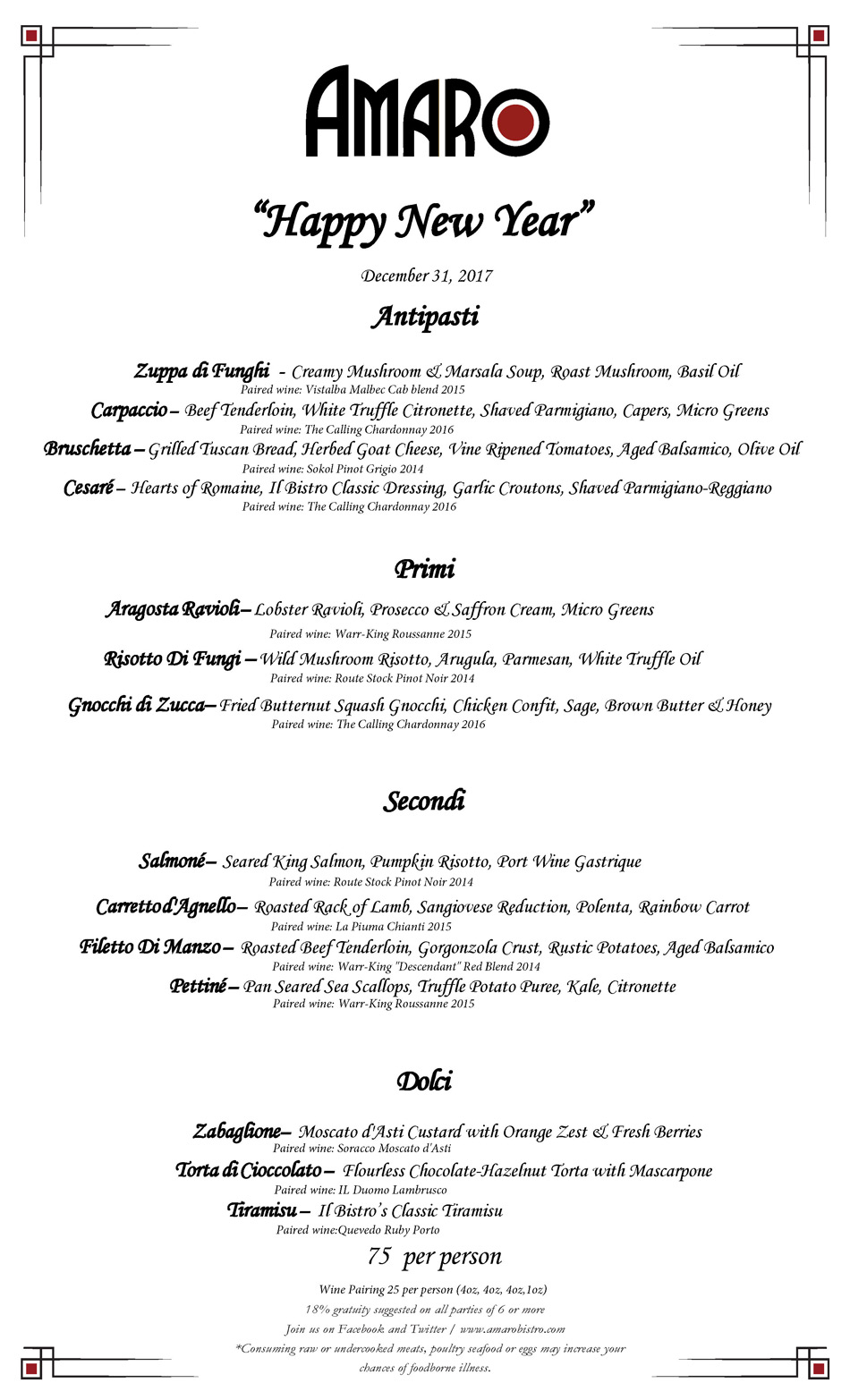 We will be closed on the following dates:

Our menu was created by Chef Nathan Luoma and all courses will be paired with wines from Newsprint and Guardian by Guardian Cellars.

$75 per person
before tax & gratuity are added Join us for Seattle Restaurant Week during October 15th – November 2nd!
(Sunday-Thursday Only) The versatile and affordable pasta has made its way into almost every American kitchen or it may even be safe to say that the average American has eaten some type of pasta at least once in a year. In fact, studies showed that the average American consumes 20 pounds of it annually. Pasta has long proved itself to be filling food, versatile, and easy to make. It mixes well with many ingredients and pairs well with a variant of sauces, protein foods and wines. But is pasta even healthy? Let’s look at this popular dish more closely.

Pasta is carbohydrates, that is well established. Pasta is an all-around good source of carbs. The carb content of whole-grain and regular pastas vary, depending on the type. A cup of white spaghetti contains 43 grams of total carbohydrates, a cup of whole-wheat spaghetti offers 37 grams of the same. Recommended daily intake of carbs for the average person is 130 grams. A minimum intake of 250 grams per day is recommended as the body needs energy to function. Regular and whole-grain pasta are both sources of complex carbs, the type that digest slowly, which keeps energy levels on an even keel.

Dietary fiber is a beneficial type of carbohydrate. It promotes digestive health and fights chronic diseases, like obesity and diabetes. Fiber does not get broken down by the body and so does not add to the sugar levels, passing out undigested. It actually subtracts from the total carbs ingested. And whole wheat pasta is a good source of it.

Important minerals are also in pasta. The dish is an excellent source of selenium which activates antioxidant enzymes that protect cells from molecular damage. Manganese is another mineral that helps metabolize carbohydrates and regulate blood sugar. Whole-wheat pasta packs 1.9 milligrams of manganese, more than 100% of the daily intake for women and 83 percent for men.

White pasta is a source of folate or vitamin B-9. Folate plays a role in red blood cell development and rapid cell growth. Whole-wheat pasta, on the other hand, is a source of the carotenoids lutein and zeaxanthin, minerals that support healthy vision. A diet rich in carotenoids also reduces the risk of lung cancer.

What makes pasta more healthy? It is low in fat, low in sodium, great for dieting, and can be be available as gluten-free. You can’t really go wrong with pasta.

Passion for Pasta in Bothell

If you’re in Bothell and craving pasta, know that we always serve a variety of this Italian classic from brunch to dinner. At Amaro Bistro, dining on our pasta is experiencing authentic Tuscan fare.

Join us for a wine dinner with Felsina Winery from Tuscany!